I bought this shirt because I am a huge fan of friends the tv show. I absolutely love it. 10/10 would recommend this website.

Bought this retro shirt for an 80's themed party. It was exactly what I expected.

Got my shirt quickly and was happy to find it it's preshrunk so I didn't have to give it to my son. Great price for a great shirt!

Great shipping time considering the current circumstances. T shirt is what I expected

Excellent customer service with editing my order AFTER payment. Had to adjust one of the kids’ sizes to an adult M and my order was edited and shipped out correctly.

Exactly what I was looking for! I embraced my bad girl self and performed a little tshirt surgery, modifying it for a rocking 80’s party! 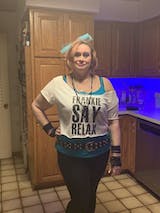 I like the shirt, wish the material was a little softer but it's a nice shirt

More Info Behind The Design

Frankie Goes to Hollywood, formed in 1980, were a British band popular in the mid-1980s. The group's 1983 debut single "Relax" was banned by the BBC in 1984 while at number six in the charts and subsequently topped the UK singles chart for five consecutive weeks, going on to enjoy prolonged chart success throughout that year and ultimately becoming the seventh best-selling UK single of all time.  It also won the 1985 Brit Award for Best British Single.  After the follow-up success of "Two Tribes" and "The Power of Love," the group became only the second act in the history of the UK charts to reach number one with their first three singles; the first being fellow Liverpudlians Gerry & the Pacemakers. This record remained unbeaten until the Spice Girls achieved a six-single streak in 1996-1997. In 1985, Frankie Goes to Hollywood won the Brit Award for Best British Newcomer, and the band also received Grammy Award and MTV Video Music Award nominations for Best New Artist.